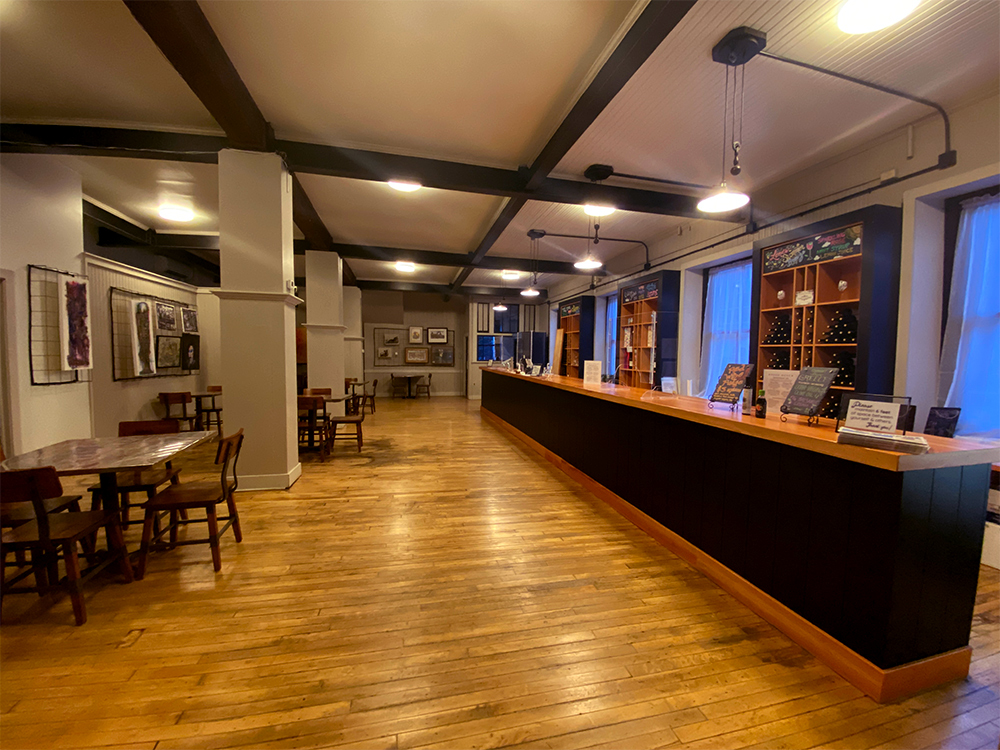 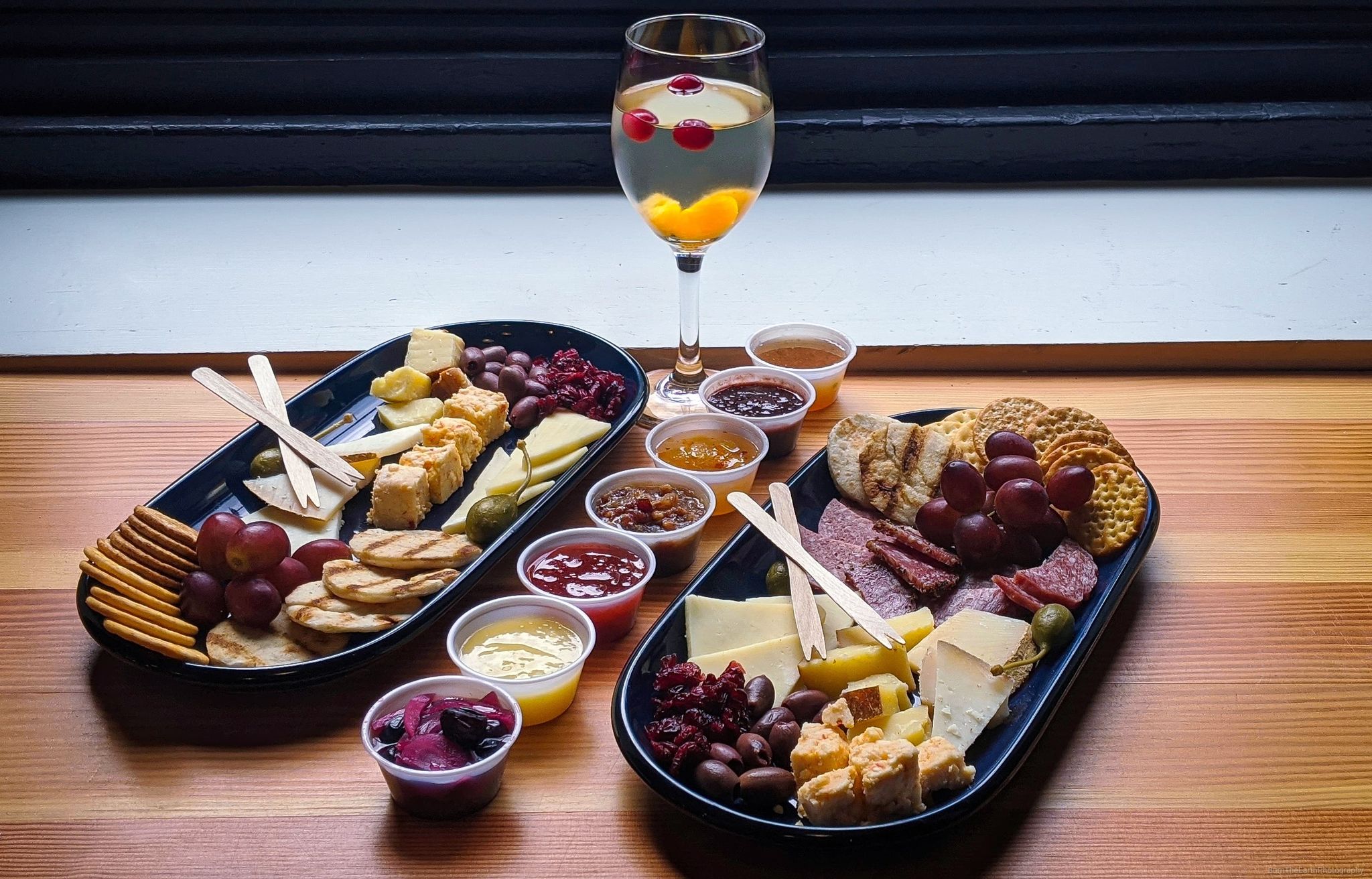 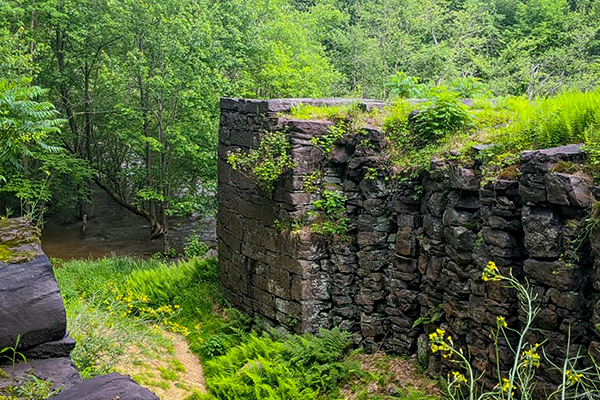 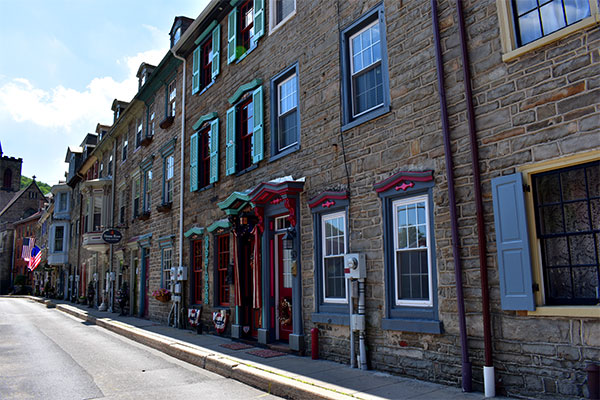 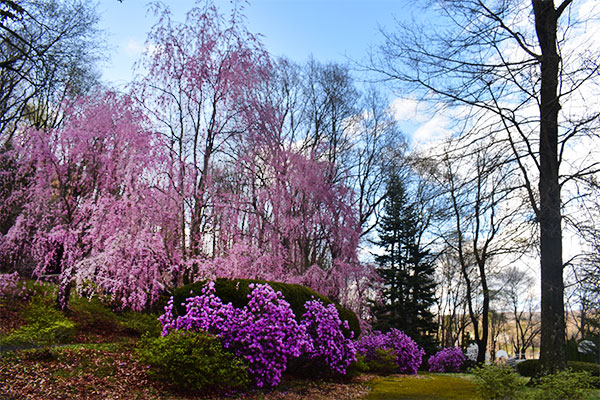 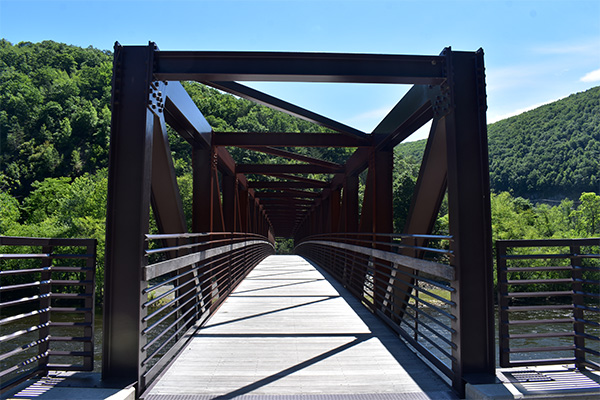 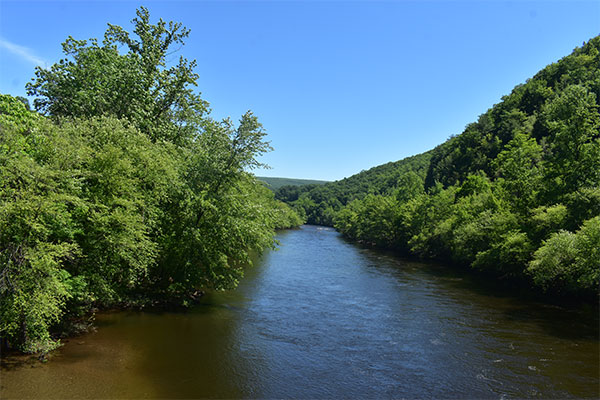 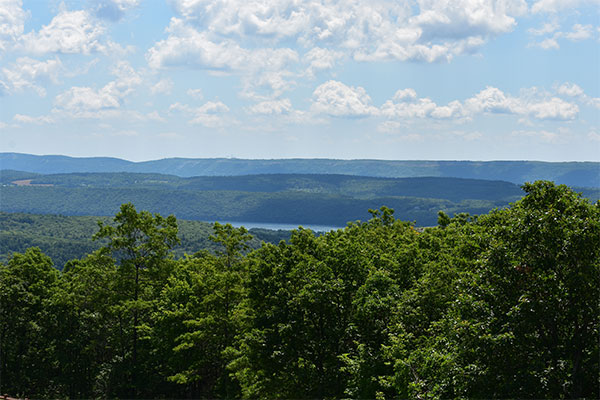 The View from Penn's Peak 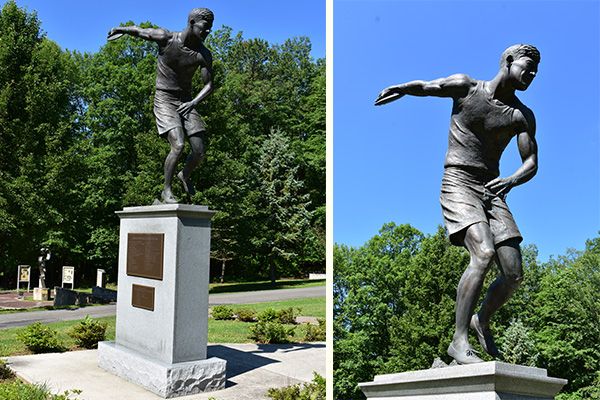 Join us at our shoppe in Jim Thorpe for tastings, wine by the glass, locally made treats from our cold case, and seasonal cocktails. Tastings are 5 for $10 or 3 for $6.

We feature artwork from local artists and occasionally host events of our own. All events are announced on our Facebook page.

If you are looking for an event rental in Jim Thorpe, we would be happy to work with you.

Visit our Jim Thorpe Wine Trail page for information about all wineries in Jim Thorpe and surrounding areas.

We do not currently allow bottles to be uncorked in our shoppe.

We occupy the Hooven Mercantile Building, built circa 1882.

Our cheese plate paired with salamis & chorizo from Nello's Meats.

All wines available by the bottle or the glass.
We do not open bottles for consumption on premises.

Semi-Dry White — AMERICAN/ FRENCH
Made with the Cayuga White grape. A progeny of Seyval, with a flavor profile similar to Riesling, but ripening much earlier. Excellent with crab legs, or with German sausage and paté. $5/glass • $12/bottle

(vin dee pass-kwa-lean-a) Semi-Dry Rosé
A dry-ish rosé that at first sniff seems sweet. A blend of three grapes, but the aroma and character come from Niagara (an American grape variety). Add a few frozen grapes and a slice of peach to a glass, close your eyes and drift to the islands. Makes a killer sangria. $5/glass • $12/bottle

(duhl-sin-ee-uh) Sweet White
Our sweet white wine made from Seyval. Not just sweet, but a well-balanced and delicious. The natural acidity plays well with the sweetness remaining in the finished wine. Good after dinner with fruits, nuts, and light desserts. Also pairs well with spicy Asian food. $5/glass • $12/bottle

Apple Wine — AMERICAN
An infusion of apple wine with red raspberries. The flavor of the apple is veiled by the perfume of the raspberry. Our sweetest wine. Goes well with fruit-based desserts. $5/glass • $12/bottle

Our Vin Di Pasqualina rosé with black cherry juice, blackberry brandy, & a dash of some rose water, lemon juice, & selzter.
$10/glass • Not available by the bottle

Our La Brusca concord wine with pineapple, peach, & mandarin orange.
$8/glass • Not available by the bottle

The Town of Jim Thorpe

Jim Thorpe, Pennsylvania is a premiere destination for fans of nature, architecture, art, eclectic entertainment, history, good food, and even the supernatural. In fact, during Victorian times, it was second only to Niagara Falls as the most popular tourist destination in the United States. It was recently voted one of the ten coolest and one of the ten prettiest towns in the USA.

The town was founded by Lehigh Coal & Navigation Company (LC&N) as Mauch Chunk, which is Lenni Lenape for “Sleeping Bear”. Its natural resources of coal, strategic location, and proximity to the Lehigh Canal saw the town thrive as a transshipment center for coal. The Industrial Revolution put Mauch Chunk on the map.

Its gorgeous Victorian architecture comes from this prosperous period in the 1800’s. The Asa Packer Mansion, completed in 1861, still stands as a historic house museum. Its lavish decoration, hidden passageways, and rumored resident ghosts provide ample entertainment for guests.

Workers on the railroad.

The vicious struggle between the oppressed working class and the mining companies brought about one of the most infamous trials in American history. “The Molly Maguires”, a 1970 film starring Sean Connery and Richard Harris, immortalized the battle between coal-mining vigilantes and the company that hired a private investigator to infiltrate their group. The resultant executions took place on June 21, 1877. Six men were hanged in the prison in Pottsville, and four were hanged simultaneously in Carbon County Jail in Jim Thorpe, on gallows built specially for the occasion.

One of the men, Alexander Campbell, pressed his muddy handprint onto the wall of his cell and declared, "There is proof of my words. That mark of mine will never be wiped out. It will remain forever to shame the county for hanging an innocent man." The handprint remains there to this day despite the many attempts to scrub it away, paint it, or even remove the section of wall to plaster over it. When a geologist examined the handprint using a gas chromatograph, the only material detected was the paint on the wall beneath it. 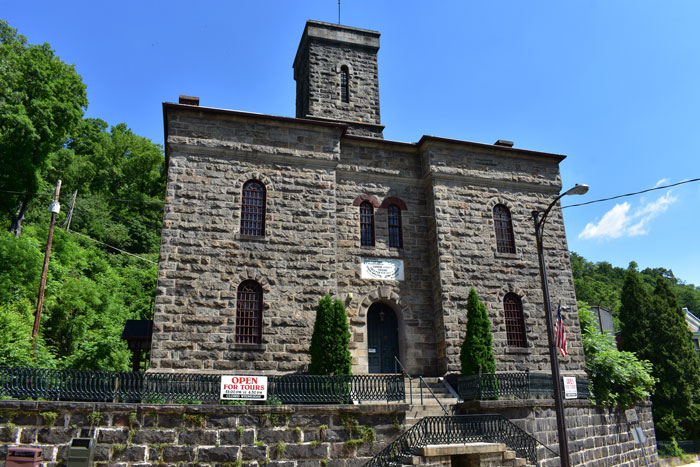 Ghostly handprints aside, the jail itself is fascinating from both an architectural and historical standpoint. The building is made of stone, seeming so old and draconian that tour-goers are often shocked to hear it housed prisoners well into the 1990’s. Tours allow you inside the cells, the warden’s chambers, and even into the basement where prisoners were kept in solitary confinement. 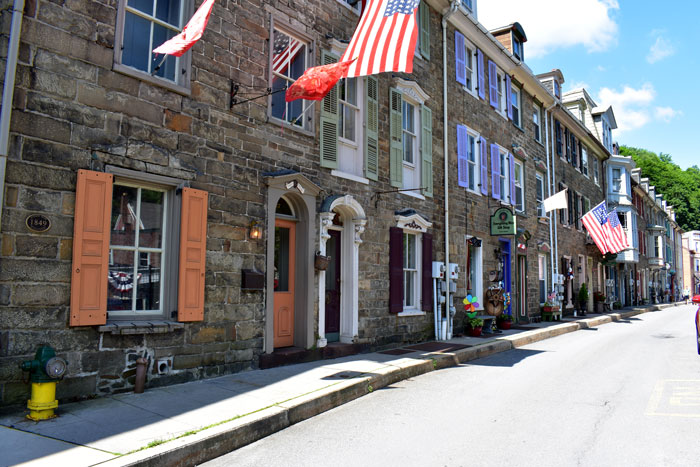 Stone Row. The colorful shutters and doorways always make it look so cheerful.

Another outstanding architectural feature of the town is known as Stone Row. Race Street, which runs parallel to Broadway (the main road), is home to a row of houses built into the side of the mountain. They were constructed by hand in the 1840’s using stone quarried from the nearby hillside. Our first location in Jim Thorpe was there, the most romantic street in Pennsylvania.

One of our favorite stops in town is our old neighbor, The Country Cottage. Behind their iconic blue door are the best pickles on planet Earth. The store owner is known as “The Pickle Lady”, and she truly is an authority on the subject and deserving of her title. She also makes incredible jellies and jams. One of our absolute favorites is her Cranberry Jalapeño. Don’t miss her mean salsa. 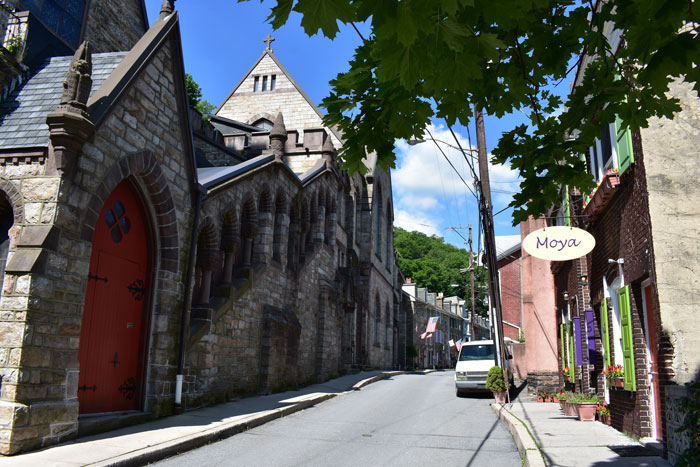 Moya on the right, St. Mark's on the left.

Stone Row is also home to St. Mark’s Episcopal Church, featured on the National Historic Registry. Built in 1829, it houses some remarkable princess Tiffany stained glass windows. Tour goers may ride in their original Otis elevator, installed in 1911. The rerodas behind their alter is an exact replica of the one from St. George’s in Windsor, England. The church is also home to several exquisite oil murals.

On the opposite side of Race Street is Moya, our favorite restaurant in town. The food is fresh, the menu both elegant and innovative, service impeccable, and the restaurant itself is beautiful. It is populated by the colorful abstract paintings of local artist Stephanie Verme, co-owner and manager of the restaurant. Her husband Heri Yunda, the chef, hails from Ecuador and also served as a chef in New York for many years. The result is truly top-notch food, at shockingly reasonable prices. We would happily pay twice as much for a meal half as good. Moya suggests calling for reservations if you plan to go from May – September, Thursday – Saturday. We powerfully suggest taking the time to do so. This food cannot be missed. 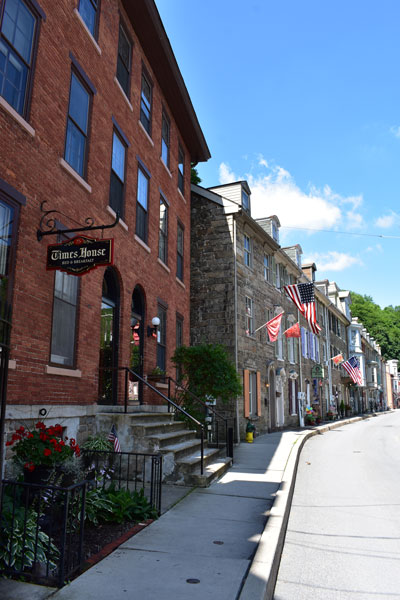 For those seeking overnight accommodations, we suggest Times House Bed and Breakfast. Also located on Race Street, the building was formerly home to the Times-News from 1927 to 1967. It is now an impeccably appointed getaway with stunning antique furniture and an international following. A Continental breakfast of home-baked scones, muffins, breads, and cakes, home-made granola, and yogurt topped with fresh fruit is served daily in the comfort and privacy of your own room. Each features a table set with china and silver.

Not everything is antique, however. They also have a Tesla charging station, along with a Clipper Creek universal charging station for other electric cars. Such forward thinking combined with a deep respect for history can all be attributed to Diane and Chris, the married couple who own Times House. They are wonderful people whose warmth and good service are often mentioned in the glowing reviews they receive from their guests. The cherry on the sundae is that guests of Times House receive a gift certificate for one free tasting from our Big Creek Vineyards outlet at the end of the street.

Although there’s plenty to do in town, the surrounding features of the area have a lot to offer. Jim Thorpe is very close to Lehigh Gorge State Park. The Glen Onoko Trail leads to Onoko Falls, a stunning 70-foot waterfall. The park has various hiking and biking trails with gorgeous views. 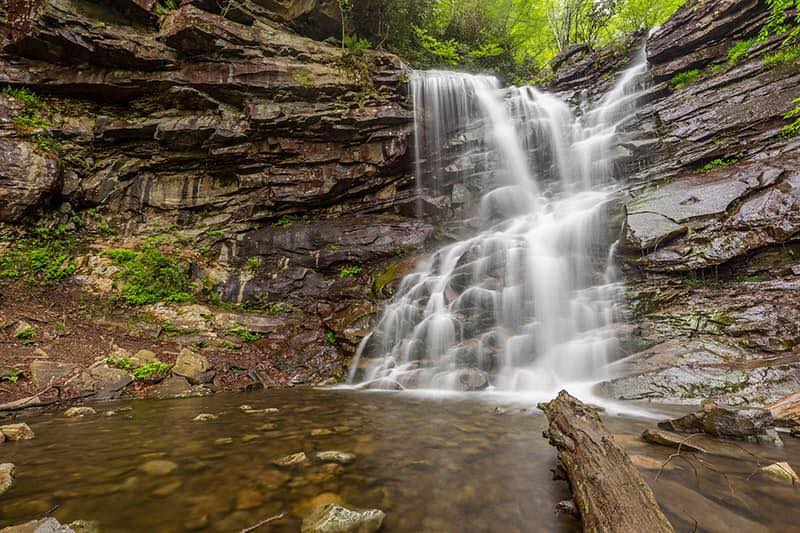 Lehigh Gorge State Park contains some of the most popular hiking trails in the northeast. There are various waterfalls, caves, and overlooks to hike to, and the trails vary in difficulty. Make sure to wear proper shoes! Nothing worse than trying to take a hike behind someone who's falling all over themselves in flip-flops. 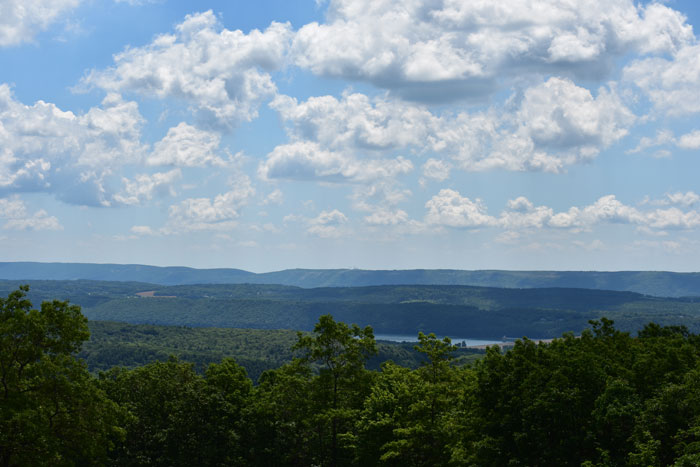 The view from Penn's Peak.

For those who are not athletically inclined but still appreciate a lovely view, Penn’s Peak is the perfect destination. It’s a music venue located a little ways up the mountain from town. The building itself is an enormous timberframe, with dramatic high ceilings. They feature many high-profile musicians and have an on-site restaurant called Roadies. The view of the valley from their deck is spectacular.

All in all, if you’re thinking of strolling around for a day or are looking to get away for the weekend, Jim Thorpe is a very attractive choice. We hope you come by and pay us a visit. 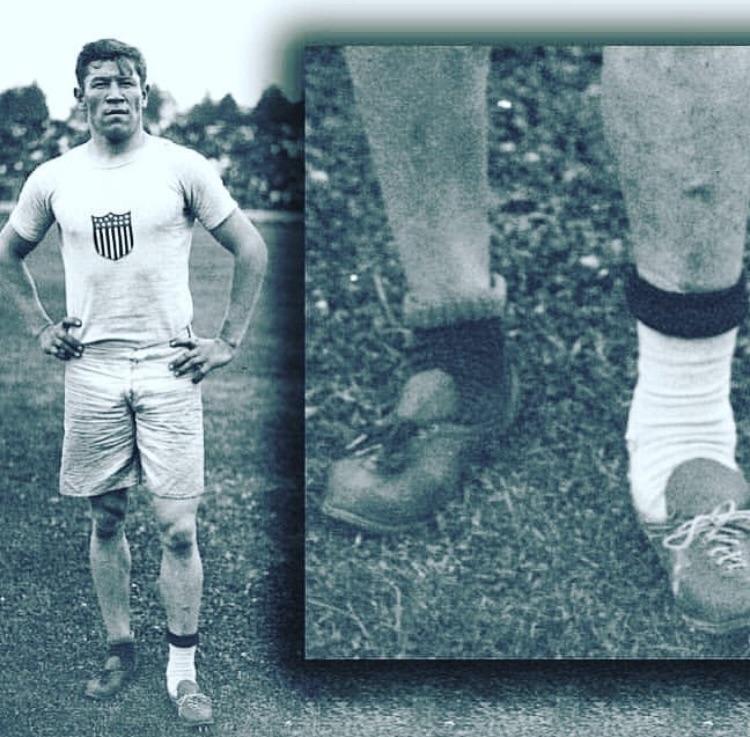 Athlete Jim Thorpe at the 1912 Olympics, wearing mismatched shoes from the garbage because someone had stolen his prior to competition. He went on to win two gold medals.

James Francis Thorpe (Sac and Fox (Sauk): Wa-Tho-Huk, translated as "Bright Path"; May 22 or 28, 1887 – March 28, 1953) was an American athlete and Olympic gold medalist. A member of the Sac and Fox Nation, Thorpe became the first Native American to win a gold medal for the United States. Considered one of the most versatile athletes of modern sports, he won Olympic gold medals in the 1912 pentathlon and decathlon, and played American football (collegiate and professional), professional baseball, and basketball. He lost his Olympic titles after it was found he had been paid for playing two seasons of semi-professional baseball before competing in the Olympics, thus violating the amateurism rules that were then in place. This was definitely racially motivated, as are the unfounded rumors of alcoholism. (“I won ’em, and I know I won ’em,” he told his daughter Grace Thorpe of his decision not to fight for his medals.) In 1983, 30 years after his death, the International Olympic Committee (IOC) restored his Olympic medals.